SAN DIEGO– Facing stalled negotiations and low-ball contract offers, six UFCW Local Unions in Southern California issued a 10-day notice of strike to Kaiser Permanente. The notice informed Kaiser of the members’ intention to engage in a strike and job actions including picketing and handbilling by pharmacy employees at all Kaiser Permanente locations in the Southern California region. Negotiations with the healthcare giant continued over the weekend.

If there’s no movement at the bargaining table, all pharmacy members including pharmacy techs and pharmacy assistants, at nearly 150 Kaiser Permanente locations will go out on strike on Thursday, November 18th at 7am.

“The employees made Kaiser Permanente look great during the pandemic and they called us everyday heroes. Now it’s time KP showed their appreciation by giving back with a fair contract that we deserve,” states UFCW Local 135 union member Aida Galindez, a San Diego based Kaiser Permanente Labor Liaison and Pharmacy Technician with thirty-two years of service.

“These frontline healthcare workers have sacrificed so much for their communities and company to only be given an insulting wage offer and two-tiered wage and benefits proposal for new hires. These workers have given their all and have too much dignity to accept the pittance that was offered. These workers are in solidarity with each other and know their value. And they are not afraid to fight for what they believe is right,” said Tom Grant, Secretary-Treasurer of UFCW Local 135.

The UFCW Locals in Southern California are part of the Alliance of Health Care Unions, a coalition of 21 labor organizations that represent over 50,000 health care employees across the country, spread in seven regions including Southern and Northern California. Last Thursday, November 4, UNAC/UHCP, USW Local 7600 and OFNHP, three of the Alliance’s largest unions with 32,000 members, served their own 10-day notice of strike. 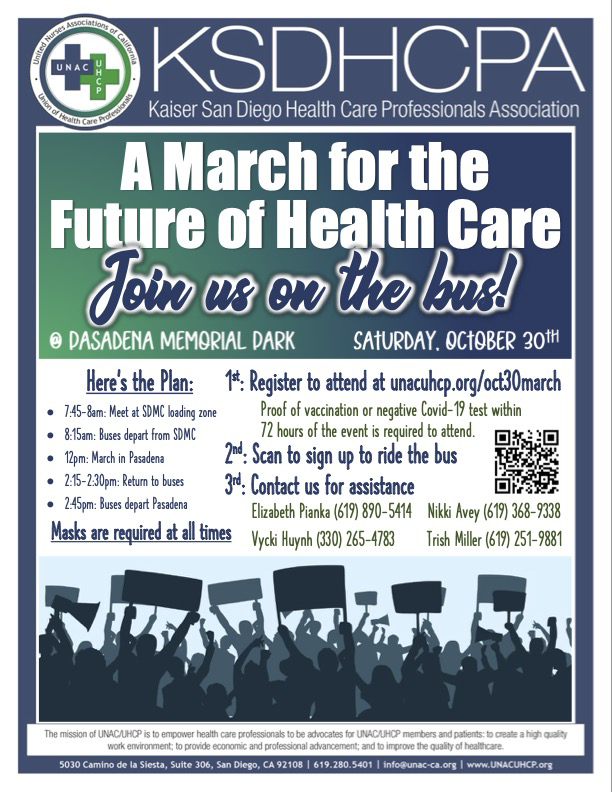 March for the Future of Health Care