WHO: UFCW union members at Ralphs, Albertsons, and Vons

WHY: Ralphs, Albertsons, and Vons have been charged with committing Unfair Labor Practices against their essential workers

CALIFORNIA – Union grocery workers at Ralphs, Albertsons, and Vons, from Central California to San Diego, will be voting the week of March 21 on whether to authorize an Unfair Labor Practice (ULP) strike against their employers.

United Food and Commercial Workers Local 135, along with sibling UFCW Locals in the bargaining unit, have filed multiple ULP charges with the National Labor Relations Board against these companies for violating the rights of members. These unfair labor practice charges range from trying to influence members by providing gifts and bonuses while negotiations are ongoing to interfering with legally recognized union activities to outsourcing union jobs.

“It is shameful that the companies would resort to these types of tactics after what essential workers have gone through for our communities and country during the pandemic. Instead of interfering with the rights of their employees, these companies should be negotiating livable wages for their essential workforce.”

This vote is an aggregate pooled vote with members from UFCW Locals 8GS, 135, 324, 770, 1167, 1428, and 1442 at Ralphs (parent company Kroger) and Albertsons/Pavilions/Vons (parent company Cerberus Capital Management). Voting in San Diego takes place March 21-23. Voting in other UFCW jurisdictions runs from March 21 through March 26, results to be announced afterwards.

On location media will have access to members walking into and out of venues on all days. There will be no media access inside polling locations. For interviews or more details on the vote, please contact the Communications Director above.

UFCW Local 135 is one of seven UFCW Locals that make up the largest union grocery contract in the nation, representing over 60,000 hard-working UFCW members who work wall-to-wall at Ralphs, Albertsons, Vons, Pavilions, Stater Bros., and Gelson’s. The members represented belong to UFCW Locals 8GS, 135, 324, 770, 1167, 1428, and 1442, spanning from central California to the Mexican border. 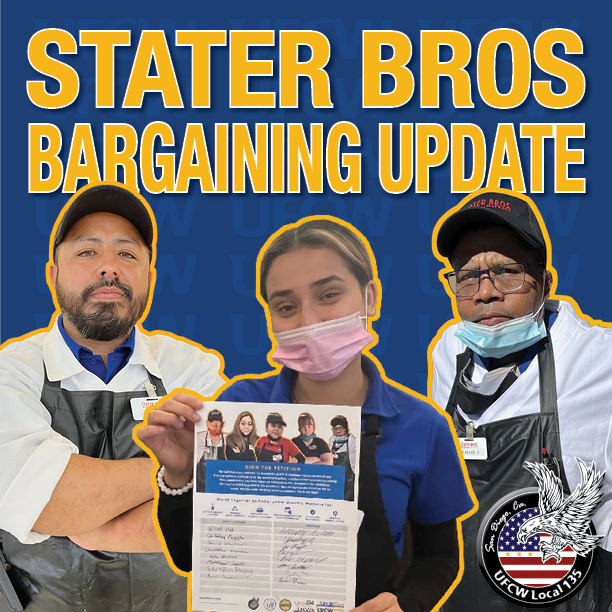