Hit enter to search or ESC to close

Workers at CVS in Spring Valley Vote to Join Local 135! 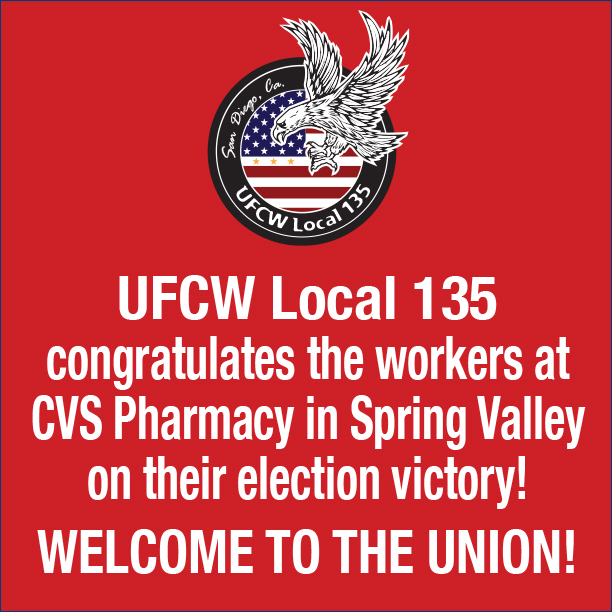 UFCW to Collectively Bargain on Their Behalf

In an online vote tallied earlier today by a representative of the National Labor Relations Board, workers at CVS Pharmacy 10919 in Spring Valley, California votedoverwhelmingly to allow United Food and Commercial Workers Local 135 to represent them in contract negotiations and assure job protections with the company.

Todd Walters, President of UFCW Local 135, said about the election results, “In the midst of this pandemic, workers see the value in belonging to a Union. Today, the workers at CVS Pharmacy in Spring Valley have chosen to be represented by UFCW Local 135. This is a victory for these essential workers that are on the front lines of the COVID-19 pandemic!”

This worker victory by employees of CVS 10919 comes on the heels of a blatant anti-union campaign initiated by the company. After a worker was unjustly fired, co-workers contacted UFCW Local 135 with their desire to organize themselves into a union.

Workers at this CVS want safer working conditions under COVID-19, quarantine pay if they get sent home, free coronavirus testing, Hazard Pay, seniority, a grievance procedure, and all of the benefits that come with being union. And now they will have the opportunity to collectively bargain for these wants.

To disrupt the organizing drive, CVS hired an anti-worker consulting firm, posted anti-union propaganda in the breakroom, interrogated employees, and frequently utilized intimidation tactics in the hopes of changing the minds of the majority of employees at that location that wanted to go union. Though the company attempted to break the fledgling organizing drive early in the process, the workers ultimately prevailed.

With this location, UFCW Local 135 now has 58 CVS Pharmacy stores under our union jurisdiction. There are another two-dozen freestanding, non-union CVS locations throughout San Diego County. We look forward to continuing the conversation with the other non-union CVS Pharmacy workers to help them determine their future as working people.

United Food and Commercial Workers Union Local 135, has a membership of close to 13,000 workers and nearly 7000 retirees throughout San Diego and Imperial Counties. They consist of workers in various fields including grocery & retail, medical, pharmacy & dental, meat & sugar processing, casino, and cannabis.